"What is range"
Critical info about dealing damage
impre
Jan 05, 2020

Curious how to understand the games distances and how ranges work? Looking at the damage numbers dropoff, it seems that whatever the "range" parameter means, is mostly bullshit number just to denote that you gain or you lose. There are four main distances in the game. The minimum - up to 10 meters (check this out if you want to learn how to test range) Short distance - up to 25 meters Medium distance - up to 50 meters Maximum distance - up to 100 meters The minimum is very interesting, because if there is no players within that distance, and you're not engaged in PvE, the game recognizes your "in combat" status as "not in combat", hence, appropriate effects (such as healing factor) kick in, even if you're being actively shot by other players. Weapons have two distances: the max-damage distance, the min-damage distance. The max-damage distance is measure how far away you can be from your target before the distance-related damage reduction occurs. The min-damage is the distance at which your weapons ceases to lose damage from distance - they don't go any lower. For majority of the weapons with long barrels, the max-damage distance is 25, and the min-damage distance is 50. Both can be extended slightly with appropriate perk cards (which can result in up to 70% damage boost in certain distances). For weapons with short barrels, the max-damage distance is 10, and the min-damage distance is 25. This means that when two opponents with same builds, same gear etc, same rifle but with different barrel lengths fight at the distance 25 from each other, the one with long rifle has not started feeling the consequences of range on their damage, while the other one, using short-barrel rifle, is already at the bottom of their damage, dealing around 40% of what their opponent deals. Additionally, short barrel decreases recoil of the guns - and there's quite a paradox - it allows short-barrel guns to be easier to use at distances over 50 meters, where the long-range guns are dealing equally low damage. 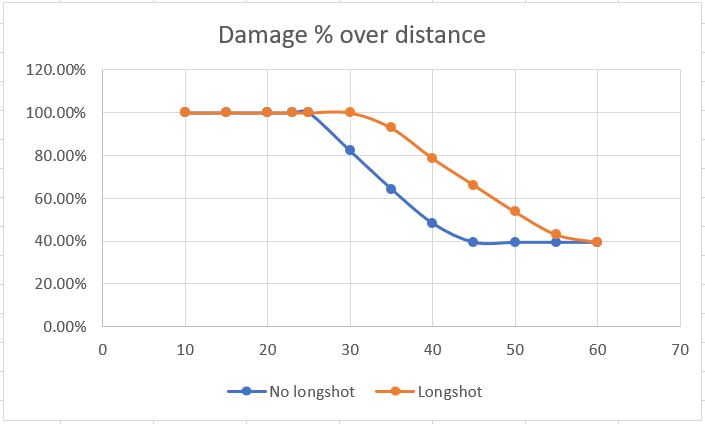 The range-increasing perks will move how far the medium distance border is, but as soon as you cross it, they cease to give any advantage over builds that don't have them. Let me reiterate - these perks will not make you deal more damage across all ranges. Instead, they'll extend the dropoff curve in a way that creates particular distance - around 33 to 45 meters - where you severely outgun people using similar gear and similar build but without the range-increasing perk cards.